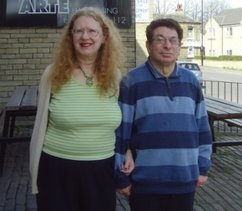 ​Barbara Schiff wrote verse when she was at school and once won a prize for one. However she let her poetry writing lapse at university when studying Philosophy despite English being her subsidiary and only started again when she wanted to have something to offer at folk clubs and didn't want to inflict her singing and empty out the clubs.
She is originally from Manchester but has studied in Nottingham and lived and worked in Surrey before settling in Mirfield, West Yorkshire. She has worked as a librarian and careers adviser and is married without children.

Although her husband, Eric Schiff only occasionally reads poems and hasn't wriiten a whole one as yet, he is one of the mainstays of Talking Zebras and has sometimes suggested the titles and/or been the inspiration for several of Barbara's poems, including "Our Cruise", "Our Holiday" and "Mirror, Mirror".  He has a degree in Law and has worked for the DHSS and the Crown Prosecution Service.