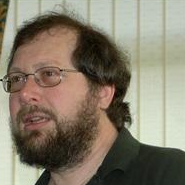 ​
​
David Kidman lives in Ilkley. From being interested at an early age in the spoken word and the creative use of language, writing was a logical development, becoming a core preoccupation over the past four decades, albeit largely in the field of music journalism (mostly CD reviewing in the folk and roots genres).

David has been writing poetry sporadically since the 1970s, although not especially prolifically; and as a result, comparatively little of his work has been published to date. He has been performing poetry since the 1990s, initially as a member of Interchange (Bradford Writers’ Network), in whose 2000 anthology Love, Death, Sex & Carrots two of his shorter poems appeared. Latterly, aside from occasional reciting of his own and others’ poetry at local folk clubs and participating in (and sometimes co-hosting) Poems & Pints sessions at folk festivals, David’s been enjoying a higher profile in spoken word circles, not least as a valued member of Talking Zebras. You can hear David performing three of his poems – Epilogue, Ullock Pike and Fortune – on the Talking Zebras CD & Booklet set.

An experienced and informed in-demand compère on the folk music circuit, David has also compèred a majority of the Talking Zebras Lend Us Your Ears fundraisers. A distinctive element of his compèring style is the penning (when required) of special customised “occasional” verses to introduce individual artistes or events.

David is also a revival singer, with a large repertoire that embraces both traditional and contemporary folk song; additionally, he is a keen exponent of the art of song parody. Although primarily a solo singer, David was a member of the Shellback Chorus shanty group for a time at the beginning of the millennium’s first decade. He currently also performs, in collaboration with Talking Zebras’ co-host Jim Saville, themed integrated song-and-verse presentations (including Maritime Miscellany, Those Coal Town Days and From Both Sides) at folk clubs and folk and literature festivals.

David has recently released a CD, Songs Worth The Singing, which contains 18 favourite songs from folk and contemporary tradition. You can visit David’s own website here: www.davidkidman.co.uk.