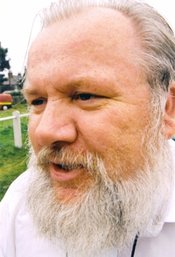 Jim is a retired teacher from Bradford. He started writing poetry in the early 1990s and since then has had numerous poems published in various books and magazines and even on CD. He has developed a keen interest in Northern Dialect Poetry and has had pieces published by both the Yorkshire and Lancashire dialect societies. However his main area of interest is  Maritime Poetry, especially the work of Cicely Fox Smith in 1998. Jim is co-editor of the definitive collection of her poetry, published in 2012.
Jim started singing in local folk clubs in a previous century and began reciting his own and other people’s poetry when he found audiences seemed to like that better (!). He joined the Shellback Chorus shanty group at the turn of the century and became a regular performer at both folk and maritime festivals, including 4 international events.
Since the club disbanded and also since retiring from paid work Jim has continued with his folk club appearances both solo and in collaboration with Dave Kidman and David Lindsay, as well as appearing in folk opera and at festivals (including over a dozen different literature festivals) both performing and giving talks on poetry) as well as giving poetry talks to various groups.
With regular appearances both live and on community radio Jim is growing a strong reputation as a performer especially at social gatherings such as church and community groups. He gives talks and recitals on many themes but especially on poetry. Any funds raised in this way is shared with the Bradford Cinderella Club, a local children’s charity, of which he is president.