Click Here to go back to Cross-Reading Menu Page

Some of our members 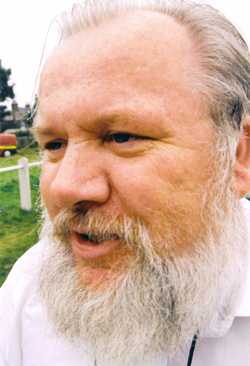 Jim is a retired teacher from Bradford. He started
writing poetry in the early 1990s and has had numerous poems published in various books and magazines. He went on to develop a keen interest in Northern Dialect Poetry and Maritime Poetry, especially the work of Cicely Fox Smith in 1998. Jim is co-editor of the definitive collection of her poetry, published in 2012.

He started reciting his own and other people’s poetry in local folk clubs in the 1990s and singing the occasional song as well. He joined the Shellback Chorus shanty group at the turn of the century and was a regular performer at festivals including 2 international events before the group disbanded in 2010. Since then he has continued with his club appearances both solo and in collaboration with Dave Kidman and David Lindsay, as well as appearing in folk opera and at folk festivals (running Poems and Pints sessions and giving talks on poetry) as well as giving poetry talks to various groups.

He has also appeared on stage in the USA at the prestigious Mystic Sea Port Festival. 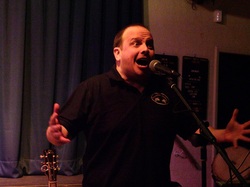 David Lindsay is a fan of the Spoken Word and with almost 170 poems/monologues in a wide-ranging 'repertoire' he can claim to have a half-decent memory and a passion for reciting.

He is trying to grow his repertoire - or at least prevent them all from falling out of his head during his busy working week.

He's finally written a dozen poems, so is happy to call himself a poet and is hoping to inflict more of his own work on the world when he finds time to actually write it.

Meanwhile, he's happy enough to share the genius of better writers and bring his own brand of the Spoken Word to anyone who cares to listen!
You can visit his website here - www.monologuedave.co.uk 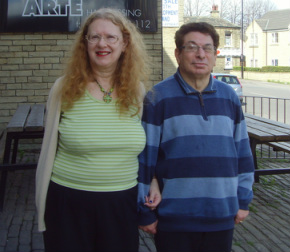 Barbara Schiff wrote verse when she was at school and once won a prize for one. However she let her poetry writing lapse at university when studying Philosophy despite English being her subsidiary and
only started again when she wanted to have something to offer at folk clubs and didn't want to inflict her singing and empty out the clubs.
She is originally from Manchester but has studied in Nottingham and lived and worked in Surrey before settling in Mirfield, West Yorkshire. She has worked as a librarian and careers adviser and is married without children.

Although her husband, Eric Schiff only occasionally reads poems and hasn't wriiten a whole one as yet, he is one of the mainstays of Talking Zebras and has sometimes suggested the titles and/or been the inspiration for several of Barbara's poems, including "Our Cruise", "OurHoliday" and "Mirror, Mirror".  He is chauffeur in chief to Barbara and to Cathy Everett. He has a degree in Law and has worked for the DHSS and the Crown Prosecution Service. 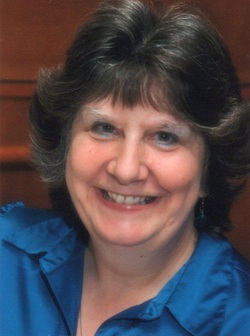 I have always loved poetry since I was a girl.  The first poem I remember hearing was Cargoes by John Masefield, which was read to us at Infant School when I was five years old.  I distinctly recall thinking I wanted to travel to all those exotic, far away places he described, and I am sure it inspired my love of travel.  It is still my all-time favourite.

Poetry can have a great influence on us and there are poems to suit every mood and situation.  Poetry is powerful and its economy of language says a great deal in a few words and makes us think deeply about matters.  It expresses a whole range of intense emotions -  joy, beauty, sorrow, love, protest, comedy.

It is well known that poetry can be therapeutic and cathartic.  Words can heal.  Whenever I am stressed, reading poems calms me down.
I also know, from my personal experience as a freelance reminiscence
facilitator with groups of older people, that by using poetry, which is
extremely evocative, I can help and encourage participants relax, smile, and  remember and share their memories and stories.  I often use poems to illustrate the different themes and topics we are discussing and reading a poem at the end of a session is an excellent way drawing all the strands together as a
conclusion.  Many older people can remember poems they learnt at school word perfect and they enjoy reciting them
in reminiscence sessions.

I think poetry in all its many forms and varieties can give us pleasure and something of real
meaning and significance. 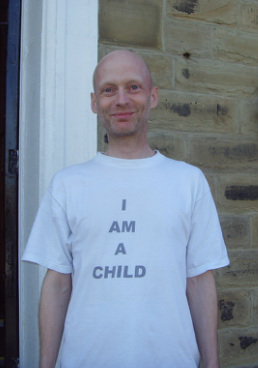 Joe hails from Leeds, but his travels take him far and wide.  With his feet, staff, and the all-important paper and pencil, his observations and performances are not to be missed.
I live in Leeds; I’ve been doing poetry, on & off since school; including sporadic open mic performances. Over the last 18 months, I’ve increased attendance at readings, with help of writeoutloud.net; poetry, gig guide. I had the good fortune, to be at the very first, Talking Zebras event; 10th October 2012.

It was advertised at ‘write out loud’. At the time, I had just started, trying to find, consecutive poetry events; within reasonable travelling distance, to brighten up, my new hobby of, long distance walking; by adding social poetry reading to the activity.

At ‘write out loud’ gig guide, I found; the day after, the first Talking Zebras reading, was a lunchtime reading at Marsden Jazz festival, & another event the same evening, in Rochdale.

It took me 4 hours to walk from Leeds to Cleckheaton, mostly through woods & fields. After Talking Zebras, I continued West; arriving in Huddersfield at 10pm. I carried on, through the night, along Huddersfield Canal bank; sometimes using my walking stick, like a blind man’s cane, because it was pitch black; arriving at Marsden, in early hours of the morning.

I slept in a gore-tex, 'bivy bag', under bike shelters; at Marsden Station. In the morning I went to Church, to get out of the cold; where I was well treated by clergy & parishioners. The service finished, just as the reading was about to start; in the Railway pub, next to Marsden Station. After that lively reading, Dave Lindsay, of Talking Zebras, drove me to Rochdale, for a reading at The Baum.

I sometimes walk, as much as, 30 miles a day, to attend readings around the country; which I’ve found at ‘write out loud’, gig guide. At the end of May 2013, I walked to Manchester from Leeds within 48 hours; having attended readings at, Talking Zebras & the Ring o' Bells, in Middleton, Lancashire, along the way. Sadly the Manchester readings were cancelled; rain & sore feet prevented me from going to read in Wigan, next day.

Another time, I cycled to Birkenhead, for the 'Poetry Spoke', at Gallagher's, on Chester Street. It took me 46 hours, to cover the Leeds & Liverpool Canal; arriving, at the Liver building, at 7am; having had about 2 hours sleep, during the journey, of about 130 miles. At Lunchtime, I ate Samphire, from mud flats at Birkenhead; soaked in organic, lemon juice, I’d bought from the 24 hour supermarket, at Liveredge; along with organic carrots, from the same place.

The gig was great, I cycled back, via Manchester, with renewed vigour; attending the curiously named 'Manky Poets' reading, at Chorlton Library; before catching a train to Bradford, & cycling the rest of the way home; as rain began, completing an estimated 190 miles of cycling; in 4 days.


I also walked to Macclesfield, for the 'Speakeasy', fortnightly reading, at the Snow Goose, Sunderland Street. I continued down the Macclesfield Canal, a beautiful walking route, but due to heat & sore feet, after 140 miles walking; I failed to get to Birmingham, for a Saturday reading there; turning back at Stafford.

I must have done a good 500 miles, under my own steam, chasing poetry events last Summer. Last Saturday, 18/01/14; I walked from Leeds to Cleckheaton & home again for Talking Zebras, it’s about 20 miles round trip. I'm now looking for more, open performance opportunities; within a day's wallking distance, from Leeds. 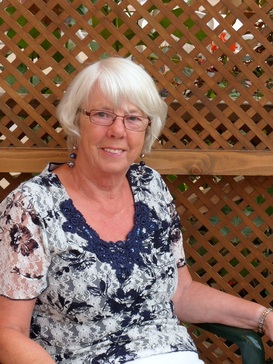 I grew up in Hampshire, in an Irish family who loved to sing around the piano. As the one who did NOT have a singing voice, I would speak some of the songs when it came to the solos.  This led to my interest in reading and writing poetry as a young child, and into my teens and twenties.

In later years, travelling round as an army wife, mother, and then grandmother, life became very busy, and I wrote very little.

Last year,  I was delighted to discover Talking Zebras in Cleckheaton and the Poetry Group at Cleckheaton Library, and poetry is now a big part of my life again. I am hoping to start writing my own work again soon. 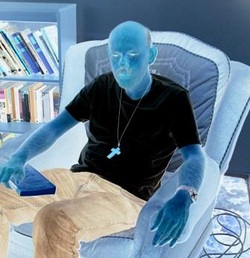 
I’m not going to say much about myself, as the best way to find
out about us is to come along one Saturday afternoon, but here’s a PDF with four of my poems as a taster. Suffice to say that I’m a beat poet from Hightown, and among others I rate Rudyard Kipling, Peter Hammill (the Van Der Graaf Generator frontman), W. S. Gilbert and John Cooper Clarke. 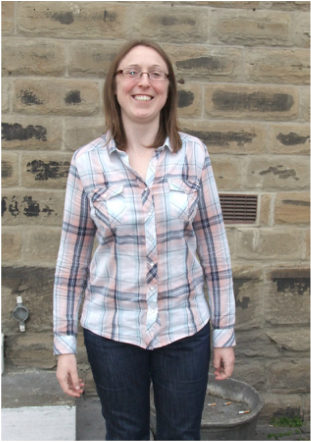 My name is Ruth Adams.

I grew up in a little village called Shelley near to the Mast of Emley Moor. With it's lovely winding countryside, it was wonderful for feeding my imaginative, creative nature. I loved having mini adventures with my friends, exploring the environment and wildlife of the beanfields, woods, and hills between neighbouring villages, even friend's gardens too!
My first poetry experiences were creating rhyming couplets throughout stories at school, poetry read by teachers and reading Pam Ayres' poetry, (one of my mum's favourite poets) found when delving into my parents' brimming bookshelves. I've always loved reading and studying literature.At sixth form English, I studied Hamlet and Keats. Shakespeare was poetry to me, I felt a burning desire to translate his language....so off to  Canterbury I ventured to study my chosen craft of Theatre Studies. By my learning via my own growing life experiences and how writers of plays/literature evoke their chraracters' emotions, loving the theatrical production symbolism and expression. I felt a lightbulb flicked on to work by Keats and other poets.


I returned to West Yorkshire after my degree in 1999. I have been working at the university library at Huddersfield since 2000.  I am part of a local theatre group, Huddersfield Thespians. You can even see my name on their website (production assistant area) http://huddersfieldthespians.co.uk/

I lead some theatre acting workshops with them and act, work backstage in their productions too. Backstage, I always love listening to the words performed.  My final year of my degree, I specialised in radio production, which included writing part of a group soap, 'Love Lane', broadcast on CTFM, Canterbury's local commercial radio station. Huddersfield Literature Festival this year, something drew me to the poetry performance workshop....and heard and took part in theTalking Zebras open mic event. I enjoyed this immensely and this re-awakened in me my reading and sharing passion for literature again. So, discovering of Talking Zebras poetry and prose group is a definite delight. I hope to write more poetry very soon .... 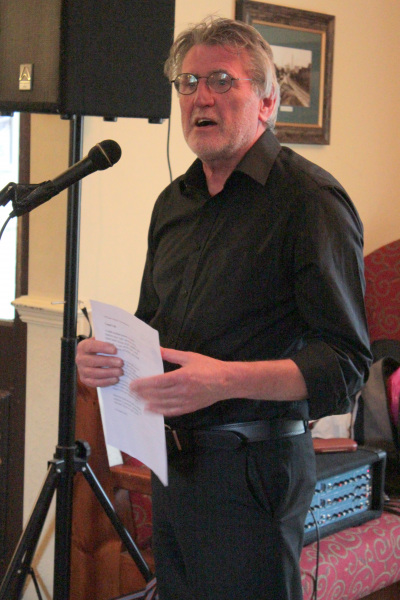