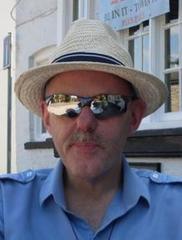 I don’t want to say too much about myself, preferring to let the poetry do the talking.

It all began in the 1970s when I was a member of a progressive rock outfit, but it blew apart after a few rehearsals owing to musical differences (the other guys were musical and that was the difference between them and me). However, the guitarist correctly advised me that I would find much more success in writing.

I’m now a performance poet, influenced by Rudyard Kipling, W. S. Gilbert, Peter Hammill, and Clive James, to name but a few. I write as ‘The Doorkeeper’ which is a reference to Psalm 84 verse 10 (“I would rather be a doorkeeper in the house of my God than dwell in the tents of the wicked”), but could also allude to Mr. Kipling’s war poem Zion, or be a portal on to any number of things.

OK, you’ve got all the information ... now, please come along one Saturday and LISTEN!!!
​